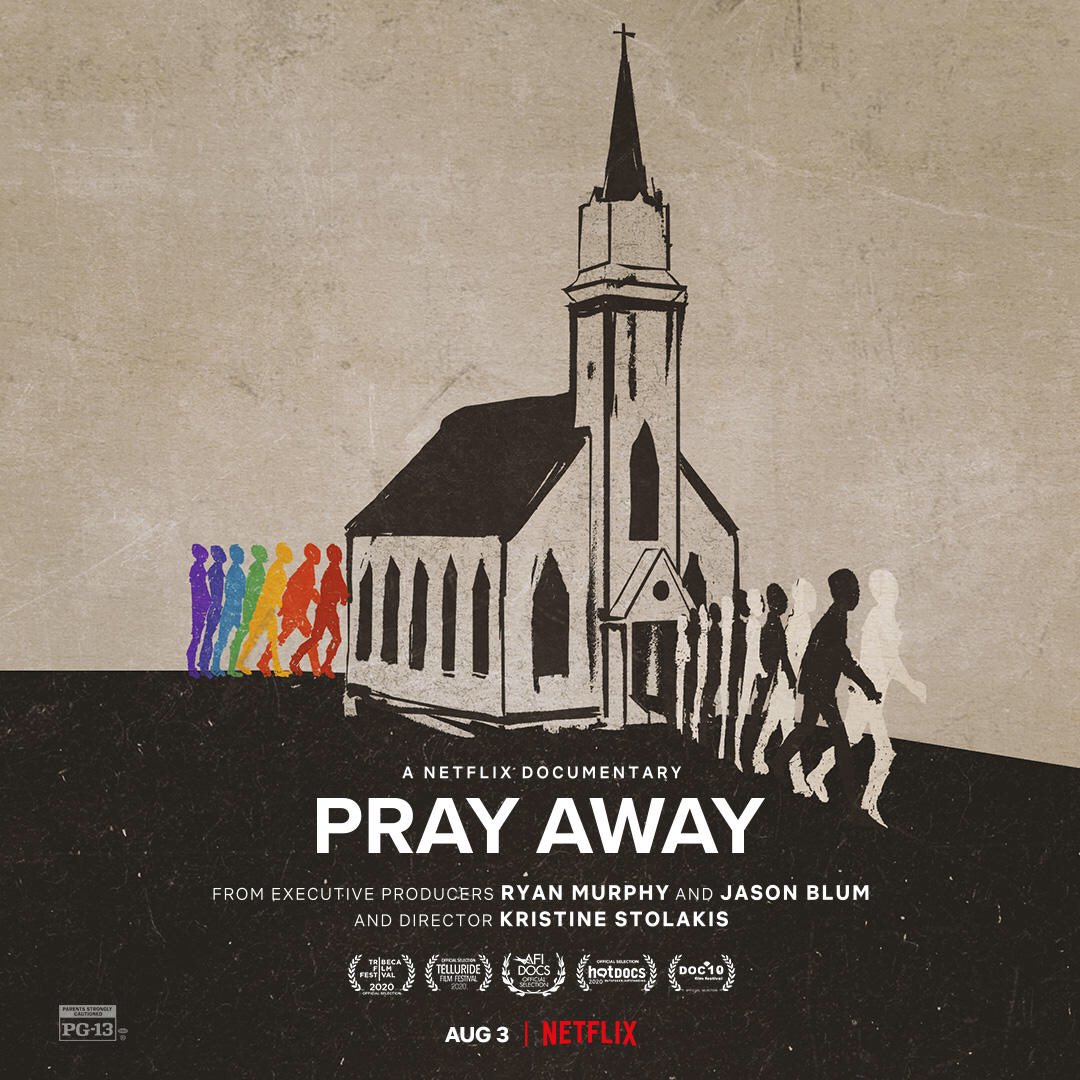 Disclaimer: Pray Away is a documentary film on the harm caused by the ex-gay movement that promotes changing one’s sexual orientation through reparative (conversion) therapy. Please be aware that the film can be very difficult to watch, especially if you have been hurt by the movement. The Pray Away website offers “tips and resources to prioritize your mental health before, during, and after viewing the film.” If you think it may trigger trauma, you do not have to watch it. If you have already watched it and need support, please reach out to a safe person. For those who have not suffered at the hands of this movement, please watch it. We need you to listen to these stories. Pray Away released August 3 on Netflix.

Below the trailer for the film is the fourth and final post in a series of reflections inspired by the film. If you haven’t read the previous posts, you can find them here: Part 1 – How Did I Believe That?, Part 2 – What’s Wrong With Me?, Part 3 – Why Can’t You Just Obey?.

“Do You Need Any Prayer?”

The opening and closing of Pray Away shows one iteration of the continuing ex-gay movement. Jeffrey McCall is the founder of Freedom March, “a diverse group of Jesus followers who have been delivered from LGBTQ identities” whose mission is accomplished “by sharing testimonies of freedom… calling the body of Christ to activation in loving their LGBTQ neighbor with the truth of transformation.” Jeffrey stands outside a shopping center asking people if they need any prayer and sharing his testimony while holding a sign that says “Trans to Christ.”

Jeffrey’s story may feel compelling. We are attracted to sensational stories of change. In the next scene he shows a social media post juxtaposing two images: him “living as a woman” with the caption “in bondage” and a current photo with the caption “set free.” The message is simple, and easy to communicate and understand.

When I was working for Exodus, I told my story in a similar way. Everything “homosexual” was dramatized as the sinful “before Jesus” story, so that any “change” – which was often forced behavior modification – seemed miraculous and could be attributed to God. I learned to shape my story to influence others. This sin-to-saved testimony was the pattern I learned from Evangelicalism to interpret my entire life, so my “ex-gay” story followed suit. I was conditioned to read this pattern into passages like 1 Timothy 1:15-16: “The saying is sure and worthy of full acceptance, that Christ Jesus came into the world to save sinners – of whom I am the foremost. But for that very reason I received mercy, so that in me, as the foremost, Jesus Christ might display the utmost patience, making me an example to those who would come to believe in him for eternal life.” These words come directly after one of the “clobber passages” used against LGBTQ people where Paul lists examples of “the lawless and disobedient” that is “contrary to the sound teaching that conforms to the glorious gospel of the blessed God” (1 Tim. 1:8-11). Casting myself as “the foremost of sinners” who was “saved” from homosexuality by Jesus made for a powerful testimony. This pattern tugs the emotions and taps into the desire we have to be part of something bigger than ourselves. I believed it, and others believed it.

Reflecting on his faith, Jeffrey says, “The biggest things that Jesus is to me is truth. When you know the truth, the truth sets you free. I believe the Bible, that these people will not inherit the kingdom of God. I do believe that people can change and have a refreshing, renewing over their whole sexuality. That the Holy Spirit can give you new desires and wants. Jesus can transform you.” The “truth” seems clear when pointing to passages like 1 Timothy 1:10 that list “sodomites” (NRSV) or “those practicing homosexuality” (NIV) as “disobedient.” Add in the other passages typically used to condemn same-sex relationships (Gen. 19, Lev. 18:22 and 20:13, Rom. 1: 26-27, 1 Cor. 6:9-10), and it seems like the Bible clearly says… but does it?

Each of the former ex-gay leaders featured in Pray Away changed their minds about “change.” The catalyst for this was being faced with the pain and trauma experienced by so many within the ex-gay movement. When confronted with the real life impact of the ex-gay message and ministry, each former leader had to wrestle with how to respond. Eventually that meant the closure of Exodus. At its 2013 conference, Executive Director Alan Chambers announced, “Exodus was started in 1976 to create a community together. But we’ve hurt people. And it is for these reasons, Exodus International, the oldest and largest Christian ministry dealing with faith and homosexuality, is closing its doors after three-plus decades of ministry.”

One important aspect of Pray Away is that it raises awareness that the ex-gay movement still exists. Though Exodus closed, organizations like Freedom March and The Restored Hope Network continue. Yvette Cantu Schneider says, “There are new people taking up the torch. And it’s not dying the way we thought it would or think it should.” Michael Bussee left Exodus three years after co-founding the organization because he saw the harm it was causing. Toward the end of the documentary, he reflects, “As long as homophobia exists in this world, some version of Exodus will emerge. Because it’s not the organization, and it’s not even the methods that they use. It’s the underlying belief that there is something intrinsically disordered and change-worthy about being gay. As long as that continues to exist, there will be some form of this.”

I’ve spent the last two months watching and rewatching Pray Away and reflecting on the ex-gay movement and my own experience within it. It has been a month since I last posted because of the emotional energy I’ve spent and space I’ve needed for self-care. I’m also three months into my new vocational adventure of working for LGBTQ inclusion in Christian spaces. My work includes offering spiritual coaching, consulting churches on LGBTQ issues, and creating theological and spiritual development learning resources. All of that to say, I’m spending every day thinking about and investing in this issue. If I have one message to those who watch Pray Away and/or who are thinking about how to respond within the LGBTQ-Christian “debate,” it is this:

Over and over in the gospels, Jesus is “moved by compassion” when he encounters people suffering and oppressed. His compassion guides his response, which is to relieve the person’s suffering and liberate them from the circumstances and systems that oppress them. Can we follow his model of compassionate love?

One way we can allow compassion to move us is to be willing to return to the question I posed above: What does the Bible say? My own journey of becoming LGBTQ affirming included a two year period of intensely wrestling with Scripture – revisiting what I had been taught and committed to for 15 years, engaging my training in biblical studies and theology to dig deeper than I had allowed myself to dig previously, and facing significant fear and uncertainty.

If you are struggling to navigate your faith and sexuality or gender identity, how might you offer yourself compassion? Are there supportive people in your life that can come alongside you as you wrestle with your questions and concerns? What do you need to protect yourself from suffering you may be experiencing in spaces that are unsupportive?

If you are someone who wants compassion to guide you to a good-fruit-bearing response to LGBTQ issues, what support do you need to openly and honestly wrestle with your concerns, questions, understanding of the Bible, etc.? Are you willing to listen to the stories of LGBTQ folks to better understand their experiences?

If you are a leader or person of influence at your church and want to encourage productive and compassionate conversation among the leadership or within your congregation, what do you need in order to take that brave next step? What resources or expertise do you need to approach your church?

Wherever you are on your journey, I want to help by connecting you with resources and support. Please reach out. You are not alone.

Next on the blog: A new series exploring common questions and concerns regarding biblical interpretation and LGBTQ inclusion. The Pray Away series focused on the impact of ex-gay teaching and did not engage biblical texts or interpretive conclusions. This next series will focus on reading and responding to the Bible.